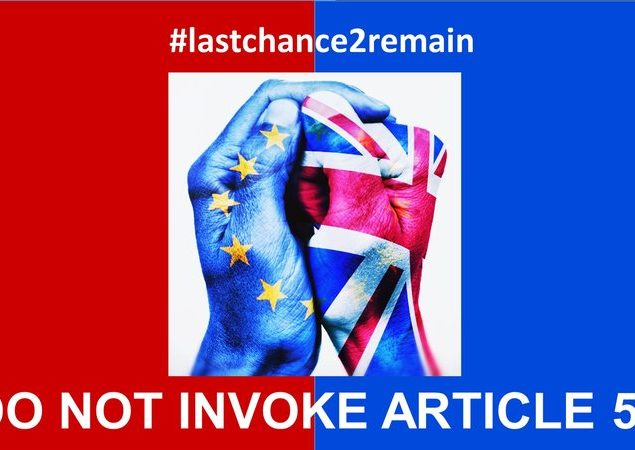 Can the UK government still legally disregard the Brexit vote? The answer is YES. You cannot change the outcome of the referendum or recast your vote but you CAN stop Brexit from being implemented. The actual process of leaving the EU can only happen by invoking Article 50. And YOU can stop it from being invoked. We have ONE #lastchance2remain Here’s how. Sign the petition now. It takes 30 seconds to sign. Make this the most significant 30 seconds of your life. How and what will this petition achieve when we already have a referendum? Despite the referendum’s outcome, legally, the most important thing that matters NOW is when and whether the government invokes Article 50 of the Lisbon Treaty. This is the significant “red button”. Once Article 50 is invoked then Brexit does become a matter of reality AND law. This process is IRREVERSIBLE and irrevocable once it starts. BUT invoking the Article 50 is NOT legally mandatory as an outcome of the referendum.  The 2011 referendum on electoral reform did have an obligation on the government to legislate in the event of a “yes” vote (the vote was “no” so this did not matter). But NO SUCH provision was included in the EU referendum legislation. However, READ THIS – if you do not force a parliamentary debate by signing this petition the government will have to act on the referendum out of political pressure as that’s what the 52% voted. So basically, what happens between NOW and Article 50 notification to EU will be driven by politics and YOUR VOICE.  ITS A VERY SMALL WINDOW. 1. Sign the petition NOW . You still have a choice. Exercise it. Costs nothing. 2. Don’t stop there. Help it reach 100,000 signatures by sharing on social networks. Make sure you are heard. 3. The Petition will then automatically enter the parliamentary debate despite referendums outcome. 4. We get a chance to make the decision right. It’s not fool proof (pun unintended) but it’s worth a shot. Sign this petition to STOP Article 50 being invoked. SIGN NOW because time is not on our side. We have only one last window left to reverse this horrendous, historic, epic screw up.

Taken with thanks from Change.Org