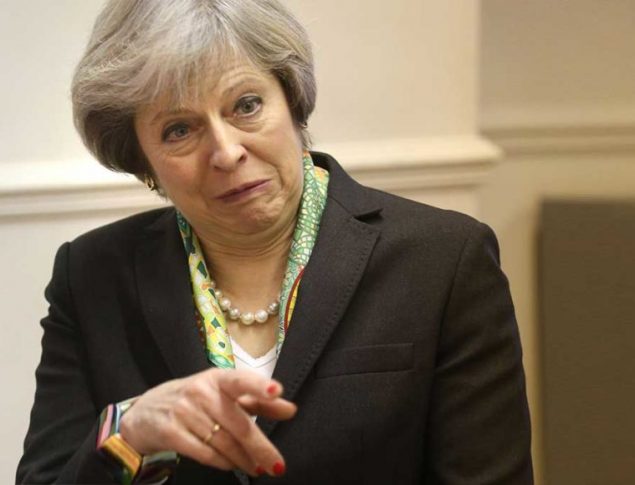 “All of which underlines a thought that has been pulling at me ever since the election started. May has continually tried to pitch this as a question of who you would wish to act as the negotiator of Brexit, either her or Jeremy Corbyn. But why would anybody believe that a woman who is not even capable to debate with her opponents would be a good negotiator?

In fact she would be an appalling negotiator. She becomes completely closed off when contradicted. She is incapable of thinking on her feet. She is undoubtedly the worst performer at Prime Minister’s Questions, either for government or opposition, since they were first broadcast. Why on earth would anybody think she would be a good negotiator? As soon as Michel Barnier made a point she was not expecting across the table, she would switch off and revert to cliché, and probably give off a great deal of hostility too.

The delusion she would negotiate well has been fed by the media employing all kinds of completely inappropriate metaphors for the Brexit negotiations. From metaphors of waging war to metaphors of playing poker, they all characterise the process as binary and aggressive.

In fact – and I speak as somebody who has undertaken very serious international negotiations, including of the UK maritime boundaries and as the Head of UK Delegation to the Sierra Leone Peace Talks – intenational negotiation is the opposite. It is a cooperative process and not a confrontational process. Almost all negotiations cover a range of points, and they work on the basis of you give a bit there, and I give a bit here. Each side has its bottom lines, subjects on which it cannot move at all or move but to a limited degree. Sometimes on a single subject two “bottom lines” can be in direct conflict. Across the whole range of thousands of subjects, you are trying to find a solution all can live with.

So empathy with your opposite number is a key requirement in a skilled negotiator, and everything I have ever seen about Theresa May marks her out as perhaps having less emotional intelligence than anybody I have ever observed. Bonhommie is also important. Genuine friendship can be a vital factor in reaching agreement, and it can happen in unexpected ways. But May has never been able to strike up friendships outside of a social circle limited to a very particular segment of English society, excluding the vast majority of the English, let alone Scots and heaven forfend continentals. The best negotiators have affability, or at least the ability to switch it on. It is a vital tool.

That is not to say occasionally you do not have to speak and stare hard to make plain that one of your bottom lines is real. But that is by no means the norm. And you need the intelligence and sharpness to carry it off, which May does not. That is one of the many differences between May and Thatcher.

Frankly, if I had the choice between sending in Jeremy Corbyn, with his politeness and reasonableness, or Theresa May, into a negotiation I would not hesitate for a second in choosing Corbyn. I am quite sure there is not another diplomat in the World who would make a different choice. May’s flakiness and intolerance of disagreement represent a disaster waiting to happen.”